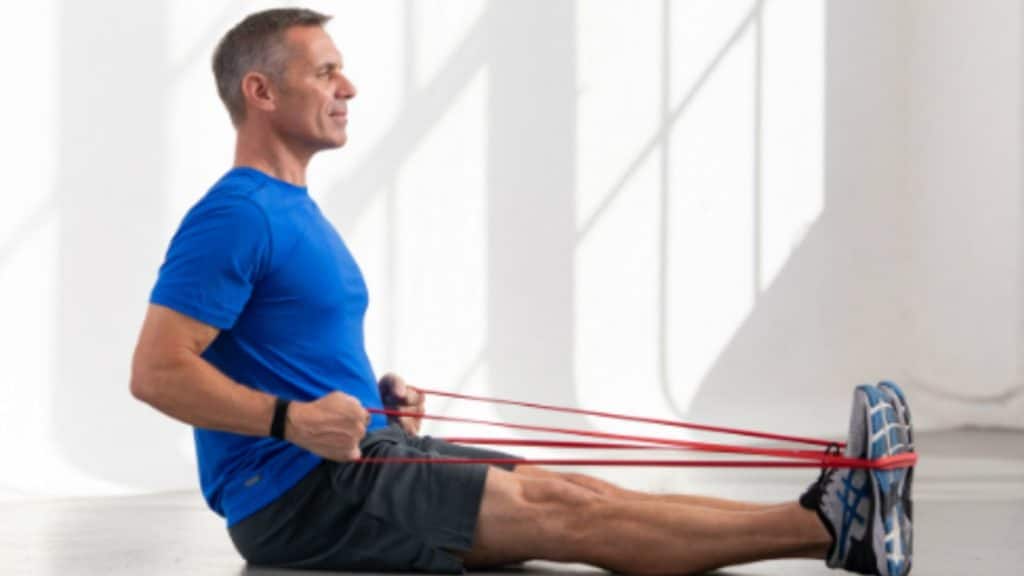 Always make sure your body is warm-up before starting an exercise program. Do 3 to 5 minutes of light cardio to raise your heart rate slightly followed by a few dynamic exercises, such as leg swings, arm circles, and air squats.

1. Band Pull-Aparts 15-20 reps (grab band with both hands and pull across chest. Keep shoulders pulled back in place as if squeezing your shoulder blades together. Don’t let shoulders rounded forward.)

2. Band Squat-Push Press 12-15 reps (stand with band under feet shoulder width apart. Place band in palm of hand. Squat down with good form, then explode back up, if shoulder mobility allows, press band overhead with both hands, then lower hands back to shoulder height and repeat squat-push press.

3. Chest Press 12-15 reps (Hold band in each hand with band looped around back. While standing with core braced tight and shoulders blades locked into place, push band away from body with both hands as if doing a push-up. Squeeze pecs together as you push away from body. Return to starting position bringing elbows back to 90 degrees. If you have a solid brace, such as post or squat rack wrap band around this. You can create greater tension this way. Squeeze glutes together (butt cheeks) for even more stabilization.

4. Standing Bicep Curls 12-15 reps (Step into band with both feet, grab band with both hands and proceed to bicep curl. Keep shoulders and back locked into place, core strong, and don’t lock out knees tight. Squeeze glutes for further engagement and to protect lower back.

5. Overhead Tricep Extensions 12-15 reps (Use both feet to secure band in place. Feet shoulder width apart. Keep core engaged,  Press band overhead with both hands, making sure shoulders are rolled back and locked in place, this is the starting position. Proceed to lower band band behind head, while bending at elbows.Raise back up, squeezing triceps to top position. That is one rep. Note: You can do this move from a seated position.

6. Butt Blaster 12-15 reps per leg (Get on your hands and knees and wrap a resistance band around the right foot. Hold the band in each hand pressed against floor and begin the move with the right knee bent and flex the foot while extending the right leg straight back, squeezing the glutes. Sort of like a donkey kick. Make sure you keep your foot flexed to avoid the band snapping back.

7. Plank- Hold for 30 sec if you can, up to 60 sec. (Wrap band around lower back, it is very important you position the band in correct position. With band in both hands lower down with hands directly under shoulders. Walk feet back and push body up into plank. You will know when you are in the correct position by your nose being slightly in front of hands. Now push your back into band, making sure you are bracing core, squeezing glutes. Now hold. Do not let your back sag, if it does, your plank is done.